The key difference of a 360° video is that while it is playing, the viewer can look around. On a desktop, when the viewer moves the cursor over the video, the cursor turns into a pointer. They can then hold down their left button and “drag” the video around, looking around as they do so. The video continues playing and so they can watch different parts of the action, rotating around the view as they do so.

As you can see below, once a 360 video begins, there are some subtle changes:

360 video has already had some interesting uses. For example with drone footage, to be able to look around. The TV show ‘Mythbusters’ shot a clip underwater, and the viewer can look around to see the sharks. That is shown in the images above

Another interesting application of 360 video is for architects or estate agents. In this example, a 3D model of an interior was constructed and then a walk-through animation created. The viewer can look around inside the building by simply dragging with the mouse. Here in the main image you can see the original video (distorted because it shows the full 360°), and in the inset image what that video actually looks like when played within our 360 video player: 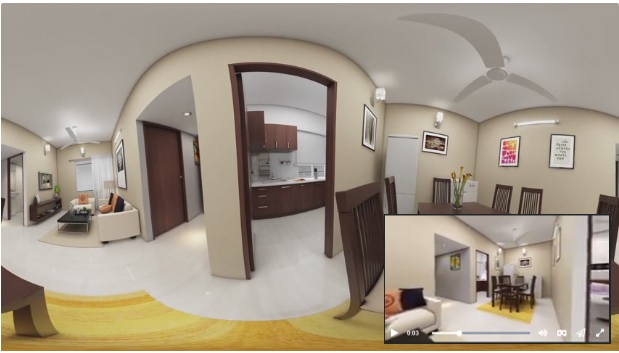 360 video support is currently experimental at this stage. One notable issue is its lack of support on iOS, and with Safari. This relates to Apple still not supporting a particular requirement of the process, whereby a video is loaded from a separate domain name to the video player. All other vendors seem to have correctly this resolved the problem as we watched a 360 video successfully in the other major browsers such as Chrome, Firefox, Edge, IE 11 and Opera. The particular issue is not with our player - watching the same video in YouTube’s 360 player has the same issue. The video simply appears in its original version, or not at all. The issue with CORS has been discussed and raised with Apple, however there is no resolution in sight.

If you would like to get started with 360 video, try out our professional online video hosting with a free trial.