We now aim to support a minimum of Internet Explorer 11, meaning code needed for prior versions of Internet Explorer to cater for its “quirks” could be removed. We no longer see requests from versions 9 and below in our analytics and so there was no need to continue supporting them. Modern browsers work much more consistently. There are still some inconsistencies: for example Internet Explorer 10 does not properly support the HTML5 full-screen API, which is why the full-screen button is not shown. Similarly, browsers on iOS also do not support going full-screen using a custom-control. That is why we recommend using native player controls on touch devices. The iOS browsers’ built-in player does let the viewer go full-screen, since it has access to that function. That option to enable native controls can be found in your player settings. Simply click on the ‘Content’ library in the admin panel, then on ‘Players’, then on your particular player to edit its settings.

We have also made visual changes, generally improving the look and responsiveness. Icons now have drop-shadows so they work better on a light background. We have removed the option to change the shape and border of the primary play button as these settings were not being used. There is a new volume control which takes up less space. The seek/progress bar has been moved to its own separate level, allowing it to be wider and so work better when embedded at a smaller size. It also expands when hovered over to make it easier to click too.

The default colour palette remains white on black as this works well with the majority of sites “out of the box”. However you are able to adjust its colours. You can change the colour of the primary play button and also the control bar’s background. We use the newer RGBA format, where the ‘A’ component is the opacity. For example rgba(255,255,255,0.5) is white at 50% opacity. You can use the colour palette within your player settings page to pick your own colour, or you can choose to enter your own rgba colour (provided by your design/marketing department) manually to match the rest of your branding. 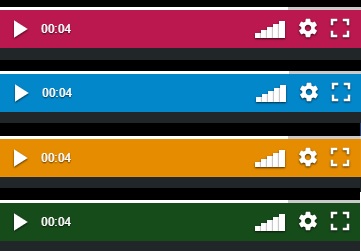 The previous HTML5 video player included remnants of features that are no longer supported, so removing those has reduced its size. Served minified and zipped, it is 2/3 of the size of the previous one. Plus, since its various files have been combined, fewer requests are needed to load its components. This results in a faster load-time.

The new player fixes some small issues. Previously the settings menu could get cut off if the full-screen button was not shown (due to lack of support, such as in IE10) and the player was embedded at a small size. Now the menu re-positions at the right-hand edge of the player.

On iOS, sometimes the old video player’s poster frame would not be correctly scaled to fit within the available space. Now it is scaled correctly when the player loads.

The latest update also includes other improvements: a new video analytics system has been built and has already started to collect data. That will be going live in the next few weeks.

A fix has also been deployed for an issue where occasionally uploaded videos would fail to encode. This was caused by the resumable-upload option: enabling it occasionally caused a resumed-uploaded file to sometimes be assigned a new ID and so the second part (upon the upload being resumed) would not match with the prior part’s ID. For example if the second part was uploaded on a different day. That confused the system.

If you have any problems or questions about the new player, just get in touch. You can try out our enterprise video hosting today. Simply email details of your proposed usage and budget.