The new analytics system makes greater use of the in-memory data store Redis. It’s used by some of the most high-profile tech companies, such as Twitter and Pinterest: https://redis.io/topics/whos-using-redis. This helps to reduce load and increase speed. Redis brings many useful features such as atomic counters and sorted sets, and it supports persistence and replication to ensure that data remains available.

The most often-requested value within analytics - the total views per video - has now been added to the content library, so you can see at a glance how many views each has had: 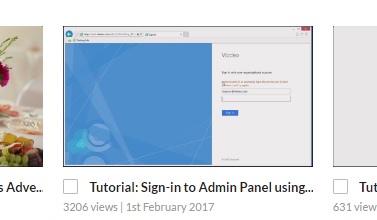 The content library has also had other minor improvements: we noticed that where groups have been created, their names are often quite long and so there was not sufficient space to adequately list them. The groups panel has now been widened - and some of the icons removed - which allows for substantially more text to be shown:

We also noticed that within the library, while the majority of videos are filmed at the 16:9 aspect ratio (the standard widescreen format), some used alternative ones such as the cinematic 21:9. As a result their thumbnail images appeared at a different height, and also their duration would sometimes be hidden behind the ‘play’ icon that appears on-hover. To solve that, we now show all thumbnails within a 16:9 region. Videos filmed at different ratios now have their frames scaled to fit within that space, so we still maintain their aspect ratio (to avoid distorting or cropping the image) while solving the problem of the previews being different heights. The layout is still fully responsive and so it works well at all screen sizes. This also mirrors how our online video player works: the aspect ratio of your video is always maintained while it is sized to best fit the available space.

You can try out our business video hosting for free, with no commitment: simply click the button on the home page. Or, if you have any questions, please do contact us at [email protected].