It would make life much simpler for web developers if there was just one web browser that everybody used. Or, failing that, one agreed-upon standard that governed the way every web browser interpreted the same piece of code. While there have been many great developments that are finally leading towards something along those lines, in the past things were very different.

Internet Explorer is known for being hard to work with because Microsoft tended to take a slightly different path to other companies. This meant that how something needed to be done to work in Internet Explorer was often different to the other browsers.

We ran into one of these quirks while developing the clickable video feature within the Vidbeo platform. If you have tried it, you will know that the idea is to place invisible regions over products featured within your videos - and then, when the viewer clicks on one, an action (like ‘add to basket’) can happen. This is ideal for business video - particularly retail.

We knew that it would be impossible to make this work in Internet Explorer 7 because the function needed for any browser to communicate across domains (between your domain and ours) simply did not exist. However Microsoft added support in Internet Explorer 8 and so our clickable video should have worked. But, try as we might, it simply wouldn’t. Any click was ignored and the action was never called. The cursor would not turn into a pointer: 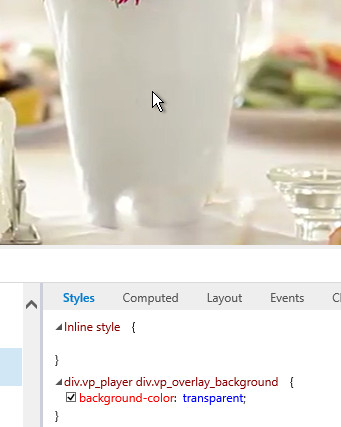 The reason turned out to be a particular issue with how Internet Explorer handles elements that contain no content and that have a transparent background. So while our overlays worked just fine when they had a background colour … 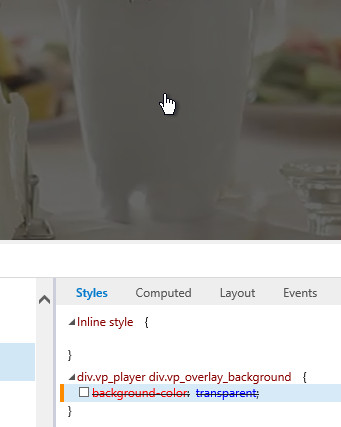 … as soon as we made them transparent, a click would simply be ignored in Internet Explorer.

Eventually we solved it by adding a transparent image. We added a tiny, invisible image in addition to setting the background colour to transparent (this was still needed to override the default style), and that was enough to solve the problem. So despite the clickable region still actually being invisible, the presence of a transparent image was (strangely) sufficient to prompt Internet Explorer into handling it just as all other browsers do without that. 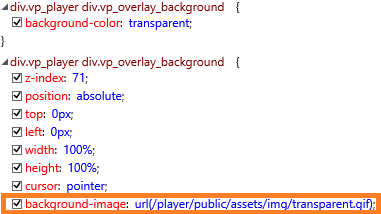 If you have any questions about Vidbeo’s functionality, or if you have run in to problems with Internet Explorer using other hosting platforms, or you have any other question about business video hosting, please do get in touch at [email protected].